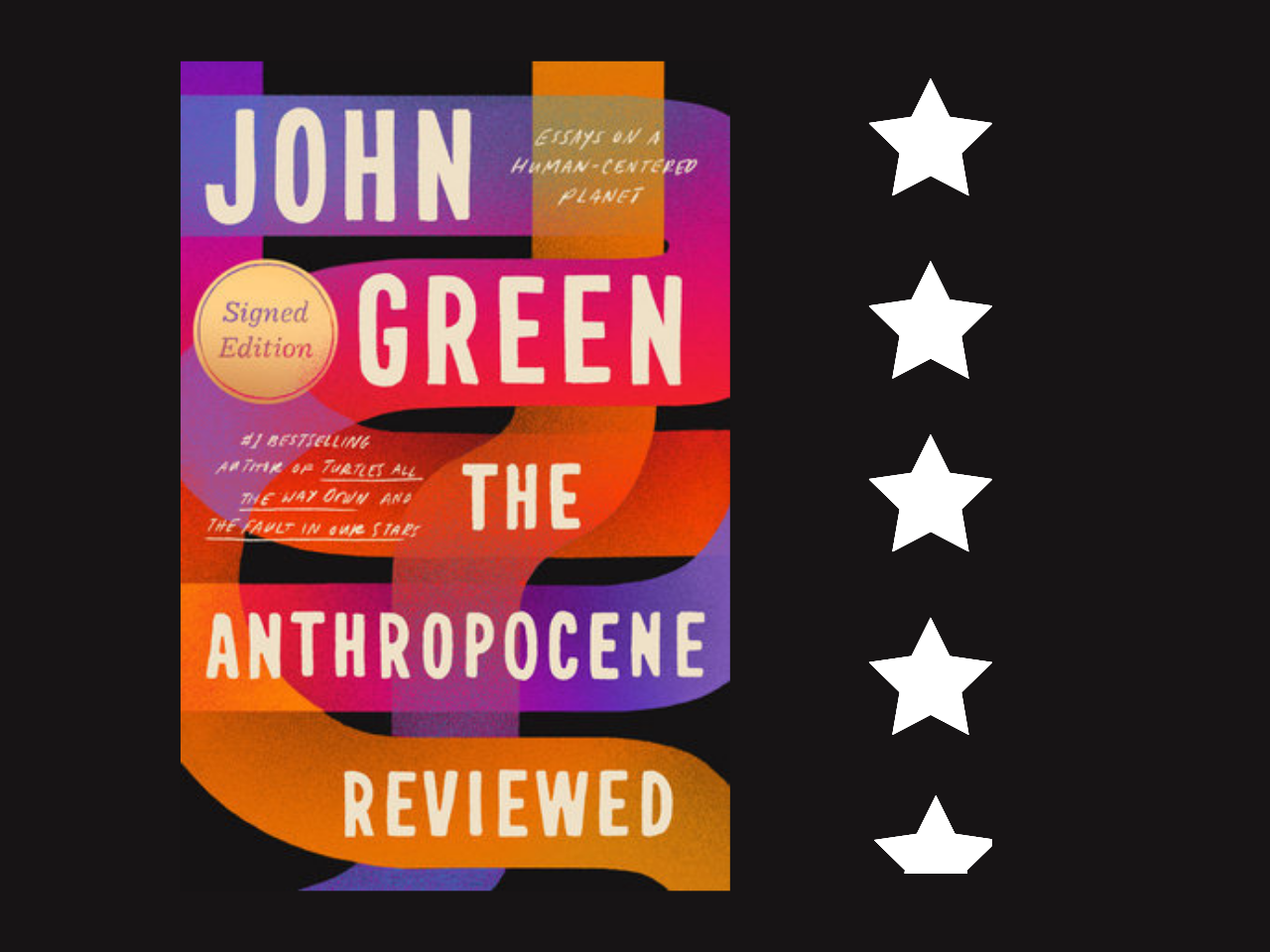 “...I want to fall in love with the world anyway, to let it crack me open. I want to feel what there is to feel while I am here.” -John Green, The Anthropocene Reviewed

What do you do when you want to give the entire universe a Yelp review? If you’re John Green, you write a whole book about it.

An adaptation and extension of the popular podcast of the same title, The Anthropocene Reviewed is John Green’s (known for Young Adult titles such as Looking for Alaska and The Fault in our Stars) first venture into a full-length work of nonfiction. Similar to Green’s podcast, the collection analyzes and rates on a five star scale the anthropocene—the proposed term for Earth’s current geological age, which has been dramatically shaped and reshaped by the human species—through personal essays on everything from velociraptors to air conditioning to scratch ‘n sniff stickers (which receive three stars, three stars, and three and a half stars respectively).

Does the book even scratch (n’ sniff) the entire anthropocene? Not in the slightest. But then again, as Green proves, a lot can be learned about the capacity for human nature through our dialogue with something as simple yet complex as the Canadian Goose (which Green rates two out of five stars).

As with all of his work, Green’s strong sense of voice and pace were especially sharp throughout each essay, but what really struck me about this latest work was his selection of topics. Out of the entire library that is the anthropocene, Green chooses to focus on Dr. Pepper, Teddy Bears, Kentucky Bluegrass, Super Mario Kart, and the like. While at first glance these choices may seem random in a world as vast as ours, they are anything but. They are chosen because they are random. The further I read into the collection, the more I realized that the power in Green’s book comes from giving a stage to the ignored, to the things and people and events often left to blend into our periphery.

The Anthropocene Reviewed asks us to give ourselves over to the act of paying attention in an attention-seeking world.

In the introduction of The Anthropocene Reviewed, Green recounts his experience in 2017 with labrynthitis, a disease of the inner ear that kept Green bedridden with only his thoughts to keep him company. Upon recovering, Green wanted to create a new sense of balance in his life (quite literally and figuratively). After years of writing fiction, and after days spent with alone thoughts and a ringing inner ear, Green found himself seeking a path—a path towards himself. As Green writes,

Green soon had me asking the same question. When was the last time I had stopped to pay attention—really pay attention—to my world? When was the last time I’d stepped into a book, the very thing we’re talking about, without stepping out again five minutes later to distract myself with a quicker, more addicting form of media? Even writing this review I found it hard to keep my hands glued to my QWERTY keyboard (which Green rates four out of five stars) for more than ten minutes at a time. Where had my fixated curiosity gone?

The book’s question of attention particularly struck me in the essay “Our Capacity for Wonder.” Green recalls a moment he had with his son in their local woods on a crisp November morning. Green, stunned by the large, grandiose valley before him, tried to get his son to look at the scene in front of them. His son, only two at the time, wasn’t buying it. His attention was instead drawn to a brown oak leaf. Frustrated, Green was about to explain to his son how they could see an oak leaf anywhere, but soon caught his own tongue as he looked at the complexity of this “common” leaf. As Green explains,

“Marvelling at the perfection of that leaf, I was reminded that aesthetic beauty is as much about how and whether you look as what you see. From the quark to the supernova, the wonders do not cease. It is our attentiveness that is in short supply, our ability and willingness to do the work that awe requires.” (33)

There is beauty and resistance in choosing to look, and there is a particular branch of beauty that comes with paying mind to the “common” leaf or even the grass we all walk on. What beauty is there in a pencil? A page? A line? When was the last time you dared to stop and sacrifice your attention?

And what greater “sacrifice of attention” is there than the act of reading itself? To read is to dedicate oneself to a singular moment, wholly and completely. In a world that pulls at your heartstrings and your capacity to focus, choosing to read is, in itself, an act of resistance. And within that resistance, we can let go.

When reading The Anthropocene Reviewed, I asked myself to take my time. I felt the weight of the paper in my hand, listened to the crack of the spine as I opened the book on a cold morning, smelled the seams after a night reading by the fire. On my 23rd birthday, I even read aloud the essays “The Nathan’s Famous Hot Dog Eating Contest” and “Googling Strangers” to my partner over breakfast, which we laughed and cried over respectively. I found myself reading with my whole body—something I had not really done since high school years and years ago.

And, not only that—I listened. I listened to each essay by actually stopping after reading a chapter to decompress and digest, an act I have found myself doing less and less in the wake of constantly consuming quick videos and my ever-expanding Twitter feed. I thought about my own rating of the Canadian Goose (which I would heartily give five out of five stars) and my feelings towards the urban plague that is Kentucky Bluegrass (I would give it two out of five stars in the hopes of promoting biodiversity). I tasted Green’s words, weighed them in my mouth, and spoke them out into my own narrative, a narrative I have been patiently waiting to find its way back to me.

Green asked me to pay attention, and in the end, The Anthropocene Reviewed reminded me of why I love books: Because in this overly complicated, fast-paced world, I can still choose to take my time and find joy in the simplicities of life through something as intentional and sensational as the act of reading.

As Green perfectly states, “We are never far from wonders” (Green 33), and a book is one of the greatest wonders we can give one another.

Grace Safford is a writer, editor, and gardener from a town in Northern Vermont so small cartographers sometimes confuse it for a lake. You can find her work published or forthcoming in Ghost City Press, Lucent Dreaming, Corvid Queen, Twist in Time, and Firewords. Currently, she is working on her first novel and a manuscript for a nature-based activity book.

Check out her magazine, COZY here